The revolution of 1979 in Iran visualized like a remedy in the minds and hearts of Ahwazi Arab people who were yearning for freedom and justice after being oppressed by tyrannous and fascism policies of Pahlavi regime.

The Ahwazi people like other ethnic groups pinned their hopes on the revolution because it was the only recourse for the freedom from racial oppression.

More than every other people in Iran Ahwazi people were victim of anti-Arab policies of the Pan Persian Pahlavi regime.

For this reason, they inspired to join the revolution so as to achieve their national rights and abolish the racial injustice and racism that had been practiced against them for years. However, in the early months of the revolution all the hopes of ethnic groups including Ahwazi Arab people despaired after the revolution’s objectives turned out to be merely delusive slogans.

Islamic Republic regime to reach their illegitimate goals and continue to dominate on non-Persian ethnic people resorted to the worst type of racist tools.

The Mullah regime with much more aggressive policies in comparison with the previous Pahlavi system has continued to carry out the ethnic cleansing policies through changing the demographic composition of Al-Ahwaz.

In this period, the policy of changing the population structure of Al-Ahwaz in various forms and widely implemented.

Some of the methods that are used in line with ethnic cleansing of the Ahwazi Arab people are set as follow:

Exile one of the tools that the Islamic Republic regime like its predecessor Pahlavi regime used it against Ahwazis. This punitive measure is employed especially for those effective Arab intellectuals and influential political figures who were campaigning to gain some of the social, political, cultural, and economic rights of the Ahwazi people.

The regime, by applying exile, is seeking different goals such as disconnection of Ahwazi intellectuals with their society as a step for depriving the society of benefits of the intellectual’s insights. Besides of displacement of intellectuals, the regime is attempting to melt intellectuals and their families in the host community (Persian community) in order to prevent the continuation of their influence on the next generations.

As a matter of fact, in the early days of the revolution the institutionalized policies, of banishing Ahwazi people to Persian regions, carried out with greater frequency and intensity.

However, later with the outbreak of Iran-Iraq war the exile and displacement of Ahwazis practically took on new and broader forms as this time there was no longer need for Iranian courts’ decisions for banishment of Ahwazis.

This is because of constant fears of rockets and mortar shells of the war that forced many of Arab people out of Al-Ahwaz. As it is estimated, around 1/5 million Ahwazi civilians relocated in provinces of Fars, Isfahan, Khorasan, Tehran and many other places.

Khomeini said war was a blessing for us as these ominous words today apparently reveal the destructive and the murderous theories that had been set against Ahwazi people during the war.

The Iranian occupying theorists viewed the war as the best opportunity to implement their horrid goals and make them as facts on the ground.

The Ahwazi liberationist movement was a serious obstacle for the Iranian totalitarian regime. Therefore, the large-scale turmoil of the war was an unrepeatable time for the government to liquidate the most of the Ahwaz’s political class once and for all so that they could never become a challenge for the regime that see the demands of Ahwazis  incompatible  with its centralized  ideology.

Finally, the Iranian death squads operated massive extrajudicial killings of any Ahwazi who was suspected of having cultural or political activism by accusing them of being fifth column, or engaged in espionage or sabotage activism for Iraqi forces.

By the end of the eight-year Iran-Iraq war, many Ahwazi political forces  called for the establishment of political and cultural institutions, but the governments of the time   did not respond to any of the demands.

At that phase, the Ahwazi Arab movement suffered the greatest human losses due to repression of the Islamic Republic regime as hundreds of Ahwazi cultural, civil and political activists were executed based on unfounded accusations like treason charges.

Additionally, the cataclysm of the prolonged war operated as a potent weapon in favor of the Iranian regime to displace Ahwazi Arab inhabitants and as the conflict reached its fiercest peak the war-stricken cities such as Abadan, Mohammareh, Albseytin and rural areas in borderline which exposed to extensive havoc and damage were almost deserted and its Arab population moved to the central regions of the Iranian plateau thereafter they were scattered among different cities. As a consequence, the large active part and one of the most efficient pillar of Ahwaz society particularly in the Mohammareh city practically excluded from influencing the movement of the Ahwazi Arab nation.

After the war, the successive governments which were undertaken similar policies against Ahwazi people refrained to allocate economic budget to reconstruct the devastated infrastructure of the war-ravaged regions especially in the cities of Abadan and Mohammareh and in this way they succeeded to  foreclose any possibility regarding the return of Ahwazi people in exile to their homeland. Thus, the Iranian occupying state was pioneered in contemporary history of Middle East to conduct the largest change of demographic composition of Ahwazi Arab people.

As always the regime with overt relocation program sought to make the war-torn areas where its Arab people had largely evacuated it during the conflict as an excuse to prevent and discourage the return of thousands of its original inhabitants.

The regime did not reconstruct these areas particularly those bordering villages and instead have declared them as prohibited military zones and have cordoned the areas off with barbed wire and patrols leaving it empty to this day.

In fact, the Arab people belong to these rural areas after fleeing their villages relocated in shanty and marginalized areas around Ahwaz city and other urban areas outside Al-Ahwaz.

They waited for long years to return to their villages but their hopes steadily weakened and became a mirage contrary to what they had previously assumed that they could soon come back to their homes after the end of the war.

The Arab people have both lost their villages and their agricultural lands that have been left full of mines and unexploded rockets. The Iranian governments did not attempt to clean up the agricultural lands from the remains of the legacy of the war and in exchange used it as a preventive measure of which depriving the Arab villagers of cultivating their lands.

Such measures combined causing the Arab villagers prefer to live under the harshest conditions in the margins of the metropolis of Ahwaz and not to return to their ruins.

Why should Europe support minorities in Iran 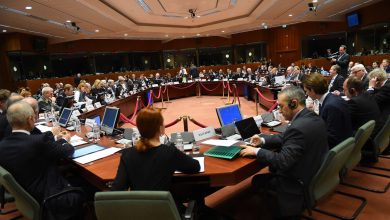